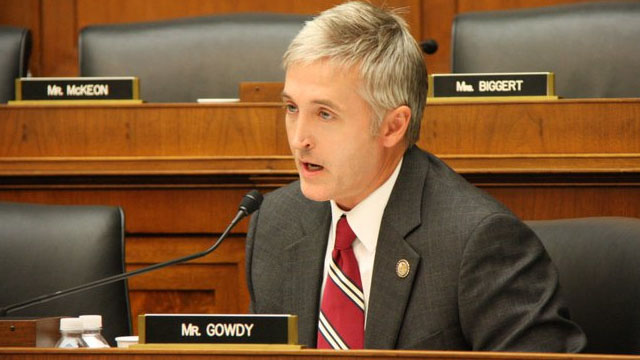 WASHINGTON (AP) — Lawyers for a former Republican staffer fired from the House Benghazi committee on Tuesday challenged comments by the panel’s GOP chairman, calling them “unequivocally false” in an escalating internal dispute just days before Democratic presidential candidate Hillary Rodham Clinton testifies. The former staffer, Air Force Reserve Maj. Bradley Podliska, has said he raised concerns about a partisan investigation focused on Clinton, who was secretary of state at the time of the Sept. 11, 2012 attacks. The panel’s chairman, South Carolina Rep. Trey Gowdy, said he was unaware of Podliska’s concerns. But on Tuesday, lawyers Peter Romer-Friedman and Joe Napiltonia said top staff members on the panel were fully aware of the concerns raised by Podliska before firing him in late June. The charges and countercharges among Republicans emerged ahead of Clinton’s scheduled appearance before the Benghazi panel on Oct. 22 and amid fierce partisan fighting about the true nature of the investigation. Clinton and other Democrats call it a partisan political exercise designed to “exploit” the deaths of four Americans and hurt her bid for the White House. Gowdy and other Republicans say the committee has been and remains focused on those killed in Benghazi and on providing a definitive account of the attacks. There have been at least seven previous investigations. Gowdy has disputed recent comments by House Majority Leader Kevin McCarthy, R-Calif., that the Benghazi panel can take credit for Clinton’s diminished public standing in recent months. McCarthy has since retracted the comment. The latest debate erupted over the weekend, as Podliska announced plans for a lawsuit challenging his dismissal. Podliska says he was unlawfully fired in part because he sought to conduct a comprehensive probe into the 2012 attacks instead of focusing on Clinton and the State Department. Gowdy says his staff chief fired Podliska for mishandling classified information and that Podliska himself was “focused on Clinton improperly” and ignored instructions to stop. Podliska’s suit has yet to be filed, but he said in a draft of the complaint that the committee turned all of its attention to Clinton and the State Department after it was revealed in March that she used a private email account and server as secretary of state. The move de-emphasized other agencies involved with the attacks and their aftermath, Podliska said. Podliska also complained about the slow progress made by the GOP-led committee and said staff members have engaged in social activities such as an informal wine club nicknamed “Wine Wednesdays.” Several Republican staff members also formed a gun-buying club and discussed in the committee’s conference room the 9-millimeter Glock handguns they intended to buy, he said. Podliska, an Air Force reserve officer, said he was terminated in part because of his military service. He went on active duty for two weeks in March, the draft complaint says, and when he returned, “his troubles with the leadership” of the committee staff began. Podliska also went on active duty for three weeks in May, prompting more questions from staff leaders, the complaint says. Gowdy, in a statement Sunday, denied that military service had anything to do with the dismissal and said Podliska’s “reserve duty was approved both times it was requested.” In a related development Tuesday, Podliska’s lawyers said they sent a cease-and-desist letter asking Gowdy to stop talking about confidential settlement discussions with their client. Jamal Ware, a spokesman for Gowdy, called it “ludicrous” that “a former employee who has spread himself across the news media” would complain about confidentiality. “The committee will vigorously defend itself against these and any other false claims and has nothing further to add at this time,” Ware said. Copyright 2015 The Associated Press. All rights reserved. This material may not be published, broadcast, rewritten or redistributed. Photo courtesy of House.gov.