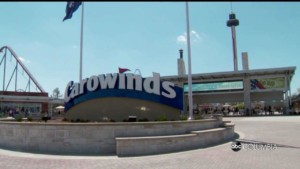 Charlotte, NC (WOLO) — If you are a thrill seeker than this may be right up your alley. Carowinds Amusement Park has announced plans to unleash a slithering surprise of ride at the theme park by 2019.

Park officials say they are introducing park goers to the newsest ride the Copperhead Strike and it’s not for the faint at heart. The new coaster goes on a “lightening fast” 360 loop, which is only the second of five inversions, before flying forward into another bunch of twists and turns. But that’s not all, the ride takes off a second time with a hang loop officials say promises to leave riders “breathless” as it speeds along the tracks  going from 0 to 42 miles per hour in 2.5 seconds.

The theme park also announced plans for a new Springhill Suites hotel by the Marriott, slated to open near the park as well. Officials say the 130 room location will give visitors a chance to stay and play when they visit the theme park.

Officials say this is the biggest investment made in the park in nearly 5 decades.

Want to see more about the ride? Check it out here in the promotional video provided to ABC Columbia News Courtesy of Carowinds. Or take a virtual ride by clicking on this link: http://www.carowinds.com/copperheadstrike