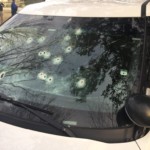 Berkley Co., SC (WOLO) — What Deputies say started as a argument between neighbors ended in a gunfight with Deputies that left the suspect dead.

Authorities say they were responding to a disturbance between two neighbors along Waterfowl Lane in the Huger area of the County officials say had been involved in an argument over speeding in the area.

When the first Deputy arrived on the scene officials say he attempted to stop the suspect who was in his car. Deputies say the suspect ended up taking cover and began firing on that Deputy for a full half an hour.  Officials say the suspect continued firing continuously at the Deputy leaving him hiding behind his Ford Explorer that was riddled with bullets for cover before he was able to begin firing back at the suspect. 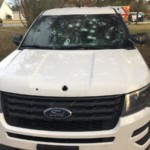 Several other law enforcement agencies arrived on the scene to offer assistance and set up a perimeter, but say the suspect made that challenging as he continued shooting at officers.

Berkely County Deputies say the suspect agreed to surrender, but did so only until officers got closer and according to authorities began firing on them again. The suspect was shot and killed at the scene of that shoot out. The Berkely County Sheriff released this statement on twitter detailing the events that occurred Tuesday evening saying all of their officers are fine, and thanking the public for their prayers.

Here is the press release regarding the shooting incident this afternoon in Huger. All law enforcement officers are okay. We would like to thank the public for their prayers. #CHSNEWS #ThinBlueLine ???? pic.twitter.com/3MxQIrXpcK