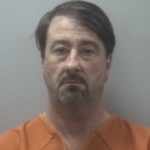 Lexington, SC (WOLO) — The Eleventh Circuit Court says a 48 year old man in police custody and in the process of being booked for a previous assault and battery charge, is now facing 7 years in prison for what officials say he did once he arrived at the Lexington Detention Center.

Prosecutors say 48 year old David Merritt was getting ready to serve jail time for an unrelated assault and battery charge he was reporting to on weekends. Officials say when he arrived he was going to be placed in confinement for reporting to jail under the influence. Prior to taking him to his cell, officers accompanied him to the bathroom where authorities say he became combative when told to change into his required uniform. After arguing with officers  and failing to comply with their demands, police say he defecated on himself, and used his hand to smear the feces on the officer.

During sentencing, Judge Frank R. Addy, Jr. who is presiding over the case said officers have enough to deal with in their field and should not be subjected to this type of behavior. Judge Addy said he intended to give Merritt a sentence that would send a message to other inmates that this type of behavior of this nature would not be tolerated. Merritt has been sent to the Departmnt of Corrections to serve is prison sentence immediately.