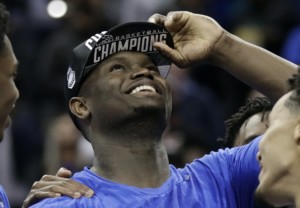 CHARLOTTE, N.C. (AP) – Zion Williamson proved he’s back and healthy with a dominating three-game show at the Atlantic Coast Conference Tournament. And that has fifth-ranked Duke celebrating yet another championship in its already-record haul.
Williamson had 21 points to help the Blue Devils beat No. 12 Florida State 73-63 on Saturday night in the championship game, giving Duke its 21st tournament title while sending the Blue Devils charging into the NCAA Tournament.
Williamson was named the tournament’s most valuable player, becoming only the sixth freshman to win the award and the first in a dozen years.
RJ Barrett added 17 points and nine rebounds and the Blue Devils (29-5) took control after halftime, earning Hall of Fame coach Mike Krzyzewski his record 15th ACC Tournament championship.
And point guard Tre Jones had his own strong outing with 18 points and six assists, all part of Duke’s closing act that showed the Blue Devils – with Williamson healthy after missing nearly six full games with a knee sprain – are ready for what’s ahead.
It started with a quarterfinal win against Syracuse, with Williamson going for 29 points on 13-for-13 shooting in his first game back. Then came an even bigger performance in the semifinals: 31 points, 11 rebounds and the final-minute tip-in that ultimately helped Duke hold off third-ranked North Carolina in a rivalry classic.
He didn’t need to do as much this time, with Duke putting four players in double figures and shooting 58 percent after the break to a 36-all score into a 14-point lead by midway through the half.
Mfiondu Kabengele scored 14 points for the Seminoles (27-7). They upset No. 2 Virginia in Friday’s semifinals but couldn’t recover after falling behind big, getting no closer than five again.
BIG PICTURE
FSU: The Seminoles had been rolling since a 1-4 ACC start in January, winning 14 of 15 games with the only loss coming at third-ranked North Carolina. And they controlled most of the game against the Cavaliers, shooting nearly 57 percent to tear through Virginia’s stout defense. But by Saturday, they managed to stay right with Duke for a half before fading as the Blue Devils made their title-clinching move. FSU made just 8 of 32 shots (25 percent) after halftime as Duke’s defensive pressure caused problems, while the Seminoles’ defense had trouble getting its own stops as Duke got out in transition more.
Duke: This tournament was all about the 6-foot-7, 285-pound Williamson, whose Feb. 20 knee sprain – that included the image of his left foot tearing through the side of his shoe as he fell to the court – had threatened to derail the title potential of a team that has spent a national-best seven weeks at No. 1 in the AP Top 25. But Williamson’s return restored that confident edge that reaches throughout Duke’s lineup at both ends of the court, from his high-flying dunks to his rim-protecting leaps to swat away shots.
UP NEXT
FSU: The Seminoles are headed to the NCAA Tournament, where they hope for another deep run like last year’s push to within a game of the Final Four.
Duke: The Blue Devils have claimed the league’s automatic bid to the NCAA Tournament, possibly as the No. 1 overall seed.
ACC ALL TOURNAMENT TEAM
MVP: Zion Williamson, Duke
FIRST TEAM
RJ Barrett, Duke
Zion Williamson, Duke
Mfiondu Kabengele, Florida State
Cameron Johnson, North Carolina
Kyle Guy, Virginia
SECOND TEAM
Tre Jones, Duke
Terance Mann, Florida State
Luke Maye, North Carolina
Coby White, North Carolina
Frank Howard, Syracuse
NOTES
Duke’s league-leading total of New York Life ACC Tournament championships now stands at 21 … this year marks the 15th under veteran head coach Mike Krzyzewski.
In addition his record 15 tournament championships (in 21 title game appearances), Krzyzewski owns a 65-23 mark as head coach in his 38 ACC Tournament appearances.
As ACC champion, the Blue Devils earn the conference’s automatic berth in the 2019 NCAA Tournament … Duke will appear in the NCAA Tournament for the 24th consecutive year, the 43rd time overall and the 35th time under Krzyzewski.
Duke (29-5 this season) improved to 103-45 all-time in the ACC Tournament, 21-12 in championship games …The Blue Devils became the first No. 3 seed since Notre Dame in 2015 to win the ACC Tournament and the 10th No. 3 seed overall.
Florida State (27-7) slipped to 19-27 all-time in the ACC Tournament and to 1-2 in the championship game.
Everett Case Award (tournament MVP) winner Zion Williamson of Duke shot 33-of-43 from the floor in three 2019 ACC Tournament games … The freshmam forward’s .767 field goal percentage set a new tournament record (minimum of 25 attempts), breaking the previous mark of .759 (22-for-29) set by former Duke All-American Mike Gminski in 1980.
Williamson led four Blue Devils in double figures with 21 points on Saturday night … His 81 total points in this year’s tournament broke the previous Duke three-game ACC Tournament scoring record of 80 points set by Art Heyman in 1961.
Williamson also set an ACC Tournament three-game freshman scoring record, topping the 78 points scored by North Carolina’s Phil Ford in 1975.
Williamson is Duke’s first freshman recipient of the Everett Case Award and the ACC’s first freshman recipient overall since North Carolina’s Brandan Wright in 2007 … Williamson is the fifth freshman MVP in tournament history, joining UNC’s Ford (1975), Sam Perkins (1981), Jerry Stackhouse (1994) and Wright (2007).
Duke freshman Tre Jones earned a spot on the all-tournament second team after scoring a career-high 18 points on Saturday night to go with a game-high six steals.
A third Blue Devil freshman – RJ Barrett – had 17 points and a game-high nine rebounds … Barrett remains the only ACC player to score in double figures in every game this season.
ACC Sixth Man of the Year Mfiondu Kabengele again came off the bench to lead Florida State with 14 points in 25 minutes … Kabengele scored in double figures for the second consecutive ACC Tournament game and the fifth time in the last seven games overall.
Terance Mann added 12 points for the Seminoles and earned a spot on the All-ACC Tournament second team.
Categories: Local Sports, National Sports, Sports
Tags: ACCTourney
Share

Cayce Police Dept. accepting donations for their annual Shop with a Cop Event