COLUMBIA, S.C. (WOLO) –  The Columbia Police Department confirms that a wanted fugitive that barricaded himself inside at the Baymont Inn and Suites off Garners Ferry Road has come to a peaceful end with no injuries.

According to Columbia Police Department, the stand-off was going on for nearly two hours with no contact with the fugitive who has now been identified at Quincey Jenkins of Florida.

Columbia Police tell ABC Columbia news, U.S. Marshals Service tracked Jenkins to Columbia where they assisted Marshals in negotiating to get him to come out of the motel. The man was wanted in Florida and has a warrant for being a fugitive, attempted murder and a weapon violation, according to the Columbia Police Department.

According to police, some patrons were evacuated from rooms in the hotel as a safety precaution during the incident at the Baymont Inn and Suites that came to a peaceful end around 11:15PM Monday night April 8th, 2019. 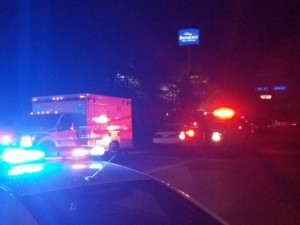 On the scene at Baymont Inn and Suites off Garners Ferry Road / Courtesy: Brian Miller (Saff)