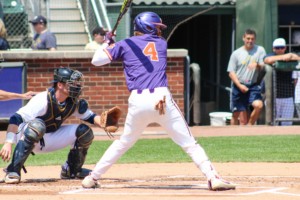 ATLANTA – Justin Hawkins’ two-run homer in the eighth inning tied the score and Grayson Byrd’s three-run homer later in the frame gave Clemson the lead, as the Tigers overcame a 7-3 deficit in its 11-7 victory over No. 11 Georgia Tech at Russ Chandler Stadium on Sunday afternoon.
Kyle Wilkie put Clemson (27-18, 12-12 ACC) on top in the first inning on a two-out, run-scoring single, then a three-run homer by Tristin English, solo homer by Baron Radcliff and an error in the bottom of the first inning plated five runs for the Yellow Jackets (30-14, 15-9 ACC), who won the series 2-1. Jordan Greene hit a two-out, two-run single in the top of the third inning, then Kyle McCann and English led off the bottom of the third inning with home runs to build a 7-3 lead.
Logan Davidson drilled a run-scoring triple in the fourth inning, then Byrd belted a run-scoring double in the seventh inning. Hawkins tied the score 7-7 in the eighth inning with a two-run homer, his second of the year. Later in the inning with two outs, Byrd crushed a three-run homer, his eighth of the year, to give Clemson the lead, then Bryar Hawkins added a run-scoring single.
Travis Marr (2-0) earned the win, as he allowed three hits, no runs and one walk with two strikeouts in 4.1 innings pitched in relief. Micah Carpenter (0-1) suffered the loss.
The Tigers take five days off for final exams before hosting Gardner-Webb at Doug Kingsmore Stadium on Saturday at 3 p.m. on ACC Network Extra.
Categories: Clemson, Local Sports, Sports
Tags: Clemson
Share