Melting Ice and Permafrost Will Cost Us Trillions

A new study published in the journal Nature concludes that the warming planet will cause more problems.  As temperatures increase, this will cause melting of ice and permafrost. And that will cost us at least $24 trillion and possibly $70 trillion (more if nothing is done to curb the warming). We all know what ice is – lots of it is locked up at the north and south poles (the arctic and antarctic). But permafrost might be a bit harder to grasp. Permafrost is exactly what it sounds like. It’s land that is permanently frozen. A large portion of the northern hemisphere is permanently frozen – roughly 24%. As the earth warms, this permanently frozen land melts. As it does, it releases greenhouse gases like Carbon Dioxide and Methane into the atmosphere. These gases then accelerate the earth’s warming because they trap what would otherwise be heat that would escape out into space. And the worst part about this is that melting permafrost is seen as a tipping point in Global Warming. That is, once it starts, it’ll be nearly impossible to stop and it will simply continue to warm the planet a lot. Here’s the complete article: https://www.weforum.org/agenda/2019/04/arctics-melting-permafrost-will-cost-nearly-70-trillion-study-finds/ 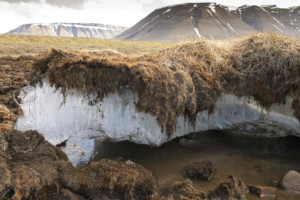