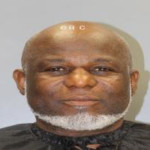 According to Deputies, on April 18, 2019, Bruce called 911 and told officials he was robbed of 36 thousand dollars worth of property.

Authorities say a short time after he he filed a police report, officials say he contacted his insurance company USAA and filed a report with them as well. Deputies say he produced exact pictures of each of the items he claimed were stolen.

Investigators say they continued to look into the alleged burglary and discovered the photos of the items were actually taken after they had been reported stolen.

Bruce was taken into custody and transported to the Alvin S. Glenn Detention Center.