COLUMBIA, S.C. (WOLO) — The University of South Carolina’s Student Government body is responding to news that Governor Henry McMaster wants to have a vote Friday on the school’s new President.

A member of the USC Board of Trustees, Charles Williams, tells ABC Columbia News that McMaster reached out to him and others on the board, in an effort to schedule a vote on former West Point Superintendent Robert Caslen.

“Whenever students are concerned, we are concerned. We remain committed to representing the entire student body and hope that you will help us in this process.” 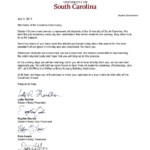 Two months ago, students crowded into the Alumni Center to protest the possible introduction of the former West Point Superintendent as their next leader.

It was then they elected to continue the search and name USC Upstate chancellor Brendan Kelly as their interim president.

Williams says the students call to action is not the reason Caslen is not in charge.

“What resounded with me and other board members were the 82% negative (ratings). 600 pages of comments, and 82% were negative. That’s a controversial candidate. That’s not what we need at this school,” Williams said.

Some students say they are surprised by the timing of a potential vote.

“I personally, what I am informed about so far, I’m not in favor of him kind of forcing that but I hope they make the best decision for the campus,” said Laura Smiley, a rising junior at USC.

As of now, Williams says the board is divided over their potential vote, but he wants to remind them about their responsibility to the university.

Gov. McMaster’s office has not responded to ABC Columbia’s request for comment, but one USC spokesman says he can not confirm at this time whether a meeting will be held at the Alumni Center Friday.