COLUMBIA, S.C. — A new regulation has been put in place prohibiting the use of natural deer lures and attractants often used by deer hunters in South Carolina.

The South Carolina Department of Natural Resources (SCDNR) says this new regulation makes the use of any substance or material that contains, or claims to contain any excretion collected from a deer, including urine, feces, gland oil or other body fluid.

SCDNR officials say this new measure was put into effect as a possible way of  preventing the introduction of Chronic Wasting Disease (CWD) into South Carolina. CWD is a contagious, always fatal, neurological disease that affects members of the deer family.

Resource officials say the disease is not caused by a virus or bacteria, but instead isthe result of a naturally occurring protein, called a prion, which becomes misfolded and keeping the animals body  from being able to break down like normal proteins do. According to officials,  when these misfolded proteins are introduced into a healthy deer, they multiply by causing the animal’s normal and healthy prion proteins to misfold and begin damaging the animal’s nervous system.  The infectious proteins according to officials transmit CWD in the urine, feces and saliva of infected individuals.

South Carolina has not had any cases  of CWD reported statewide and to keep it that way SCDNR officials say they are following the lead of other states in proactively working to ban the use of natural lures and attractants in order to minimize the potential risk for CWD before it makes its way to South Carolina.

Jay Cantrell who is a Big Game Biologist with SCDNR says,

“Numerous other states have a ban on these products in place, this is part of a comprehensive effort to keep Chronic Wasting Disease out of our state and protect our valuable deer herd from this devastating disease,” ….“There’s no practical or feasible test that can be performed on these natural urine products, or on the deer they collect the urine from, so there’s no way to know if they are safe.” 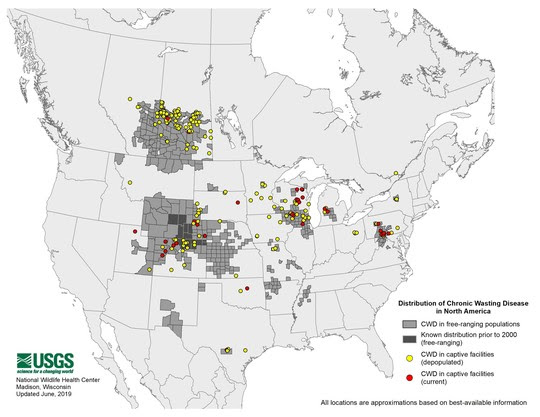