COLUMBIA, SC ( WOLO) — Hurricane Dorian is now a category 5 storm with 160 mph sustained winds, according to the national Hurricane center.

Hurricane Dorian has become the “strongest hurricane in modern records” for the northwestern Bahamas, according to officials. 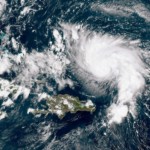 Sunday shortly before 11am ET, The national Hurricane center reported the eyewall of the catastrophic hurricane was about to hit the Abaco Islands with devastating winds.

As of 11am Sunday storm surge and hurricane watches have been issued for portions of the Florida east coast.

The National Hurricane center says there is a likelihood of strong winds and storm surge along the Georgia and South Carolina coast.

Residents along the coast of Georgia and South Carolina should remain aware and have a Hurricane safety plan in place.

This is a developing story stay with ABC Columbia news for updates.