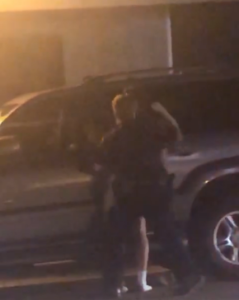 Columbia, S.C. (WOLO)– The Columbia Police Department is responding after video surfaced on social media.
The cell phone footage shows a person being arrested by a CPD officer.

In the video the officer appears to punch the suspect several times in the head.

A spokesperson for the department says the incident is under investigation.

“We have reviewed the citizen video of a Columbia Police officer struggling to control an arrestee and will determine the circumstances surrounding the initial arrest, including why the officer was alone at the time. We can assure the public than an administrative review of the entire incident will be conducted by the Office of Professional Standards Internal Affairs Unit. We will be forthcoming with details in keeping with our standards of accountability and transparency.”

Neither the officer, nor the detained individual have been identified.

No information as to why the man was handcuffed has been released.

President Trump holds rally in SC ahead of Democratic Primary