Coroner: Man died due to smoke inhalation during house fire 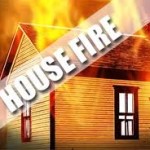 Coroner Gary Watts said the body of Tracy Roberts was found just after 5  a.m. in his bedroom that was filled with smoke from a smoldering fire.

He died at the scene due to smoke inhalation, Watts said.