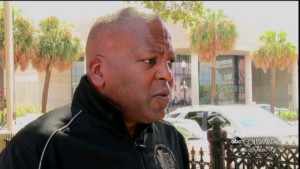 Mr. President, welcome to Columbia, South Carolina. In these incredibly difficult times in which we live, we may disagree fundamentally on many issues of public importance but I hope to use your visit to reach out in the spirit of bipartisanship & grace.
I know that a discussion around bipartisan dialogue & civility may seem naive in today’s political culture but in Columbia we recognize that two people equally yoked can see the same issues very differently and that we must respect the diversity of political thought.

For those issues on which we agree, we should try to achieve real solutions.

This is not our first meeting. Your staff has been gracious enough to invite me several times to engage with you and the administration.
Our discussions have primarily focused on infrastructure. I still pray that our federal government will make it a priority to address America’s $4 trillion infrastructure deficit. FEMA’s contribution to the restoration of the Columbia Canal after the 2015 1,000 year flood remains at the top of our local agenda and we look forward to continuing that dialogue.
We’ve had opportunities to agree on the preservation of the tax exemption on municipal bonds that allows local governments to continue to invest in infrastructure, the banning of bump stocks used in mass shootings like the one in Las Vegas and on the establishment of Opportunity Zones.
When our city was first chartered more than 200 years ago, Sen. John Gervais advocated for “the oppressed of all lands to find refuge under the wings of Columbia.” That spirit of inclusion inspires us to this day and as a result we have also had significant disagreements, among them: In Tornillo, Texas as president of the nonpartisan U.S. Conference of Mayors, I led a  bipartisan demonstration of Mayors against the inhumane treatment of children at the U.S.-Mexico border; In the wake of Charlottesville, I established the Mayors & Business Leaders Center for Inclusive & Compassionate Cities & I continue to serve in the vanguard of mayors fighting the reality of global warming.
Neither of the above is a complete list of agreements or disagreements but the focus of this weekend’s discussions, The First Step Act is one on which we agree. As the former Director of our state’s second largest law enforcement agency, I firmly believe that finding thoughtful ways to return citizens to society where they can rejoin their families & communities, contribute to society and the economy and live up to their God given potential is a win for America. I pray for a positive dialogue on continued reform this weekend from you and the Democratic hopefuls.
My final request and primary motivation for this open letter is as a trustee and supporter of Benedict College.
This historically black college that will host your official visit is a special place. Founded by a woman and now led by a woman for the first time in its history, Benedict continues to be a “power for good in society.” On this hallowed ground trailblazers have been proudly educating students of all backgrounds for 150 years since the closure of one of the darkest chapters in human history. President Roslyn Artis’ leadership has led to the institution’s recognition as the 2019 Historically Black College/University (HBCU) of the Year.
Benedict has a special place in my heart. It is where my in-laws met as students and started the family that produced my family. As a proud trustee I also exercise a fiduciary responsibility to this institution of higher learning, so I hope, pray and request in that every meeting, every encounter that in every word we speak on our campus this week be in the interest of our college’s prosperity, our mission, civility and bipartisanship.
Thank you,