Don’t fall victim to a phone scam this holiday season, tips for keeping your money safe

The Columbia Police Department is warning people against another round of phone scams. 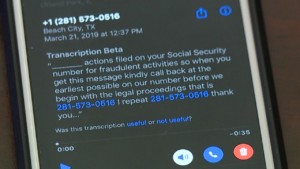 Columbia, S.C. (WOLO) — The Columbia Police Department is warning people against another round of phone scams. As we approach the holidays, it’s important to remember that there are scammers out there who want your money.

On Tuesday, the Columbia Police Department reported an attempted scan. A citizen said someone claiming to be a Dominion Energy representative threatened to turn off the citizen’s electricity. They had an hour to pay for late power bills, or it as lights out. Luckily, the caller knew better, but some people don’t know that these scams are out there.

One of the more common scams is over the phone. Scammers claim they’re a local law enforcement agency or utility group, and demand your money to fix a problem.

“They try and exaggerate a sense of urgency, where you feel like you can’t hang up the phone, and that’s all part of the scheme to get you to panic and send them something,” said Cullop.

He said the phone scams tend to come in waves.

“I would imagine, if there’s one specifically with the utility company like this in our area, it’s probably a safe bet that there’s probably some more calls that are going to happen in this time frame,” said Cullop.

While there might not be an increase of calls during the holiday season, Cullop said people might be reporting the attempted scams more frequently since it’s a time of year when money can be tight.

“With the holidays coming up, people know that they’re going to have to spend money. So when they lose that money, it’s more of a shock factor to them. Like ‘oh I’m not going to be able to buy Christmas presents’ or something this year. So they may be more inclined to report it than a different time of the year where it’s not as important to them,” he said.

If you don’t answer, you don’t fall victim. If you’re being asked to pay in gift cards, that’s a big red flag. Just hang up.

“A lot of the times, people who use technology less, they usually are more susceptible. And a lot of times that tends to be the elderly,” said Cullop. “The biggest thing I can stress is they’re trying to keep you on the phone, because if they can emphasize how much of a serious issue this is, you’re more likely to give them the money.”

If you do think you’ve fallen victim to a scam, the first thing you should do is call your bank. The bank might be able to stop the transfer or put a freeze on your account. Then, make sure you contact your local authorities.