Gas Prices lower at the pump this winter: AAA Carolinas

According to AAA Carolinas, drivers in South Carolina are paying an average of $2.28 a gallon 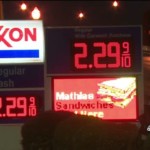 ABC Columbia image of gas prices in the Midlands

COLUMBIA,(WOLO)– Gas prices are dropping and could continue to take a dip at the pump.

According to AAA Carolinas, drivers in South Carolina are paying an average of $2.28 a gallon, which is six cents cheaper than last week.

According to a spokespeson, “Motorists across the Carolinas are paying less to fill-up as U.S. gasoline supply outpaces demand this winter,” said Tiffany Wright, AAA spokesperson. “Typcially this is the time of year when pump prices trend cheaper as motorists tend to drive less.”