NEW: Cayce Police “We are leaving no stone unturned” in search for Faye Swetlik

The search continues for missing 6 year old Faye Swetlik, investigators say they are exploring every possibility

In a Thursday morning update, Cayce Police Sergeant Evan Antley said in a case of this nature “We are leaving no stone unturned, we are looking for even the smallest piece of evidence that could point us in the direction of bringing Faye home.”

Antley says the goal is still, and remains, to bring Faye Home.

In regards to the manner in the way the search is being conducted, Investigators say the FBI has a systematic way of doing things and that’s what they are using.

Officials say the phone line is ringing non stop and they are asking anyone to bring any information forward.

Multiple law enforcement agencies, along with family and neighbors, are searching for the six-year-old. 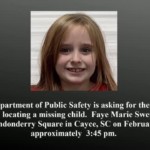 Faye disappeared on Monday, February 10th, around 3:45 in the afternoon.

The six-year-old has strawberry-blonde hair, blue eyes and was wearing polka-dot boots and a black t-shirt. She was last seen playing in her front yard after getting off her school bus. 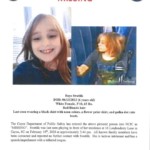 It has now been 64 hours since the search for six-year-old Faye Swetlik began. Deputies are still stationed at the entrances to the Churchill Heights subdivision, limiting access to residents and those with a reason to be there.

Our Tim Scott has been on the scene you can follow him for updates https://twitter.com/TimScottTV

If anyone has any tips or information, or video investigators are asking you to call the hotline at (803) 205-4444.