February was the second warmest February on record globally. For the most part, the coldest air got trapped in Alaska. That left the warmer air over most of the rest of the planet. Notice Europe and Russia.  Europe as a whole was more than 8 degrees Fahrenheit warmer than average, while many spots in Russia averaged a full 12 degrees Fahrenheit warmer than the long term average! For a complete summary, see : https://www.wunderground.com/cat6/second-warmest-february-on-record-globally 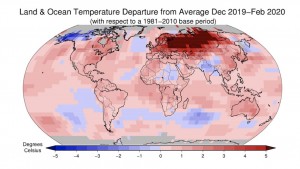 Is Math Illiteracy Making it Hard for People to Grasp Coronavirus