Inmate tests positive for COVID-19 is released by a judge 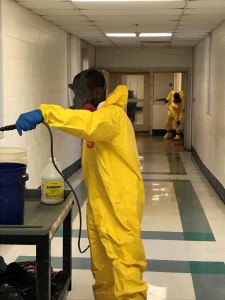 North Charleston, SC (WOLO) — A man in incarcerated in the Sheriff Al Cannon Detention Center has been released from the facility after testing positive for coronoavirus (COVID -19).

Monday, a judge ordered the release of the infected inmate after he was diagnosed with COVID-19.

A contracted cleaning crew has sanitized all areas of concern.  As an Additionally, as a precaution for all inmates and employees, the cleaning crew will sanitize the entire facility over the next several days.

According to officials, the inmate who had been behind bars for 3 weeks on a family court bench warrant that landed him with a sentence of either 90 days or a fine of $1,200. Officials say he was screened for coronavirus with no issues. That was until this past Friday April 3rd, when the detention center says he began to exhibit symptoms and was immediately isolated and tested, this time with a positive result.

To be safe, inmates that were being held in the same housing unit as the infected inmate have been isolated to one location where they will be under close observation for at least 14 days, screened and where they will have their temperature checked  They will be under close observation for a minimum of 14 days and will be screened and have their temperatures taken daily.

The Sheriff’s Office continues to screen all incoming inmates, and designated personnel continue to perform temperature checks of all incoming inmates and employees.  A contracted cleaning crew is currently sanitizing all areas that may have been affected.