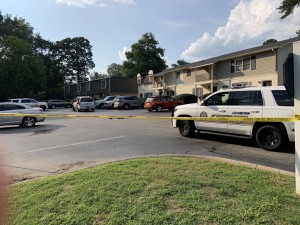 Lexington Co., S.C. (WOLO)–New details tonight in a shooting that left two Lexington Co. deputies injured.
Investigators say the suspect in the case is 27 year old Albertus Lewis.
Deputies say he was out on bond after being charged with a 2017 Richland county murder.

According to our own archives, in that case, Lewis is accused of shooting his girlfriend then leaving her in a wheelchair in a hospital parking lot to die.A spokesperson for LCSD says the medical outlook for the injured deputies is very good.
The shooting happened at the Woodland Village Apartments around 4pm Sunday.
According to deputies… a caller said Lewis was armed and attempting to set something on fire.
Investigators say he had a gun and a small child in his arms when they arrived.
SLED is investigating.