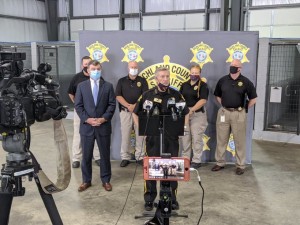 Columbia, S.C. (WOLO) — On Tuesday, Richland County Sheriff Leon Lott and South Carolina Department of Corrections Director Bryan Stirling announced charges against an inmate who they say ordered shootings while behind prison walls.
Lott and Stirling say this is just another example of needing to jam cell phone signals in prisons.

“We know through the use of cellphones, even though they get sent behind the wall in prison, they still continue to carry out crimes,” said Lott.

Harvester Jackson, 27, now faces new charges after ordering shootings while being incarcerated.
“The crimes that we have him charged with now which is accessory to attempted murder, accessory to discharging a firearm into a dwelling, and accessory to arson,” said Lott.
Lott said Jackson facilitated these crimes while in prison thanks to a cell phone.

“He was convicted in 2013 and got a ten-year sentence for armed robbery and burglary. Three days, three days after he was committed to the Department of Corrections, he was already in trouble. Three days. He didn’t wait long before he got in trouble inside. Eight different times now since he’s been incarcerated, he’s been caught with cell phones,” said Lott.

“I think we’ve got two different victims that he arranged for their cars and houses to be shot up and burned,” said Lott.

Lott and Stirling are calling on the FCC and Congress to pass legislation that would allow them to jam cell signals in prisons.

“Once we go try to find the cell phone, it’s one of the most dangerous things our officers can do, is take a cell phone away from a person that’s incarcerated. And there’s a simple solution, and it is jamming. The Federal Bureau of Prisons are allowed to do it, that’s what the law says, but states cannot. And that makes absolutely no sense to me,” said Stirling.

“It’s all because they’re allowed to use this right here, in prison, to continue to do what they were doing when they were on the outside. This is what they use on the outside to commit the crimes, this is how they communicate, this is how they set it up. When they go to prison, they continue to do this,” said Lott. “We’ve got to stop this. We’ve got to protect our community.”

SC for Ed to host 'Stand Up and Step Out' event