(CNN) — Smoke from the wildfires on the West Coast is making its way to the East Coast.

These are images from a NASA satellite that shows clouds of smoke stretching coast-to-coast. 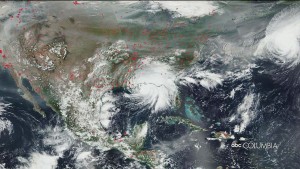 The National Oceanic and Atmospheric Administration says the smoke made its way East in two different directions.
some of the smoke also drifted into Canada.

The wildfires have led to hazardous air quality along parts of the West Coast, some of the worst ever recorded.
It hasn’t affected air quality in most Eastern states. It has however claimed lives. More than 30 people have been killed by the wildfires.