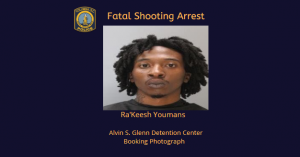 COLUMBIA, SC (WOLO)– The Columbia Police Department says they arrested a man in connection with a fatal shooting that occurred on Rosewood Drive this weekend. Authorities say 21-year-old Ra’Keesh Youmans has been charged with murder and possession of a weapon during a violent crime.

According to authorities, The Richland County Coroner identified the victim as 31-year-old Paris Lavelle Pralour.  According to the autopsy, Pralour died from a gunshot wound to the upper body. Investigators say Youmans shot the victim after the victim was in an argument with Youmans’ female acquaintance.

Officers say they were dispatched to 3624 Rosewood Drive shortly before midnight on Saturday night to reports of a shooting when they found the victim with serious injuries. Officials say the victim was taken to a local hospital where they was later pronounced dead.