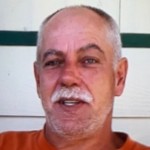 Authorities say Tracy Parsons, 53, is accused of invading a home on Dennis Dairy Lane on October 19.

According to investigators, Parsons confronted the male homeowner, hit him with a pistol and tied him up with zip ties.

Deputies say he then went inside the home, assaulted the female homeowner with a pistol and tied her up.

Then, they say he stole a small amount of cash, as well as the keys to the victim’s car and left the scene.

The Sheriff’s Office says a DNR agent and a South Carolina Highway Patrol trooper saw the stolen vehicle on SC-34, just West of Silverstreet, SC, and attempted to stop Parsons, who started the chase with law enforcement and fled in a soy bean field.

Authorities say on November 4, Parsons committed a burglary in Laurens County, where he assaulted the homeowner and stole a Kia Rio.

On November 7, Crimestoppers received a tip that Parsons was in West Virginia with family, and Boone County deputies found the stolen Kia Rio.

West Virginia State Police say Parsons stole a dark gray 2019 Ford F150 Super Crew cab and he also broke into a home and stole a sum of cash and firearms.

This case remains under investigation.

Despite fewer travelers this year, CAE still working to keep passengers safe from terminal to destination