S. Carolina considers joining much of US in open gun carry 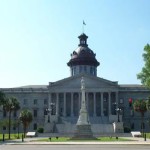 COLUMBIA, S.C. (AP) — Some South Carolina lawmakers want to allow people with permits to carry concealed guns to be able to carry their weapons out in the open.

South Carolina is one of only five states without so-called “open carry,” joining atypical partners such as Illinois, New York, California and Florida.

But in South Carolina, the opposition isn’t exclusively from gun control proponents. Both local and state law enforcement leaders have said allowing even trained people to openly carry guns could make it harder to determine who are criminals in emergencies and cause fights to escalate.

A bill allowing open carry for people who already have licenses to carry concealed weapons will be discussed Wednesday at a House subcommittee hearing. Lawmakers are inviting the public to comment after having experts testify last week.

The proposal, which has about 40 sponsors in the House, has come up before and failed. But supporters think there is a better chance this year after Republicans gained seats in both the House and Senate. A bill that would likely ban almost all abortions in the state has seen a similar boost from the additional Republican lawmakers.

“What we are asking is for you to allow concealed carry holders to take off their coat,” said D.J. Spiker of the National Rifle Association at last week’s meeting.

Wednesday’s meeting is set for 1 p.m. and will be streamed online at the Statehouse’s website.