The town has been without a Police Chief since October 2020 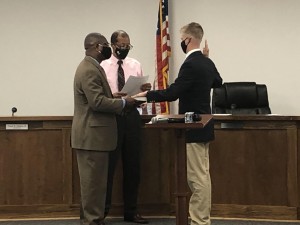 Lexington, SC (WOLO) — The Town of Pine Ridge once again has a Police Chief.  Andre’ “T” Williams is the town’s first Police Chief in 5 months.

Chief Williams was officially sworn into office during a Tuesday evening town council meeting.
Williams is an Army veteran, who graduated from Claflin University. He has served as Police Chief before, most recently in Kingstree.

Williams says he is ready to turn the near-non existent department around. Pine Ridge’s Former Police Chief and the rest of the officers resigned in October of 2020. One officer was also sworn into office Tuesday evening, Patrick Swanson is returning to the department after a deployment.