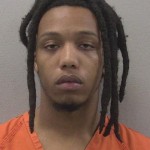 According to officials, 18 year old Treveon Nelson and two minors are charged with murder, kidnapping, criminal conspiracy and possession of a weapon during a violent crime, say arrest warrants.

Deputies say they are accused of shooting Sanaa Amenhotep,  in a field off Rish Road in Leesville on April 5.

Investigators say the three suspects and Amenhotep went to the field the night of April 5 after Amenhotep was lured into and held in a stolen car as they traveled from her Richland County home.

According to Lexington County Sheriif Jay Koon, the suspects knew Sanaa and they all knew each other.

Investigators worked on the case with the Richland County Sheriff’s Department, the State Law Enforcement Division, the Lexington County Coroner’s Office and the 11th Circuit Solicitor’s Office, according to Koon.

Nelson is being held at the Lexington County Detention Center after a magistrate denied him bond Saturday, say officials.

The Springdale Police Department has charged Nelson with criminal sexual conduct, kidnapping, and assault and battery of a high and aggravated nature in connection to an April 25 incident, say officials.

Deputies say the minor male and female are being held at the Alvin S. Glenn Detention Center and the South Carolina Department of Juvenile Justice, respectively.

RCSD, other officials provide updates on the arrest of a soldier accused of hijacking a school bus Tuesday

National Day of Prayer celebrated at the Statehouse Thursday