COLUMBIA, SC (WOLO)– Richland County Sheriff Leon Lott says he is frustrated with the amount of gun violence in the community. The sheriff says there have already been eleven murders in the county this year, one more than at this time last year. 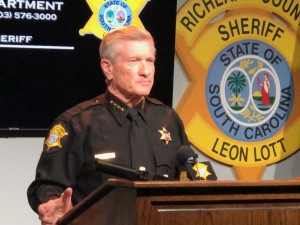 Wednesday, he announced two arrests in an April 6 shooting on Devoe Street. Investigators say 26-year-old Troy Stevenson is charged with murder in the death of 62-year-old Charles Jackson during a drive by shooting. Deputies say the shooting was in retaliation from a shooting the previous day on Lucille Drive. 19-year-old Dai’Juan Richardson is charged in that incident.

According to investigators, the incident started on April 5 at Stevenson’s home on Lucille Drive in which two females, including Richardson’s girlfriend, got into a fight which ended with Richardson being struck in the head with a bottle when he intervened. Deputies say Richardson left the home and later returned with a gun, firing several rounds at the home but not injuring anyone, before returning to his girlfriend’s residence on Devoe Drive. Investigators say Stevenson went to the Devoe Drive home the next day and committed a drive by shooting, striking Charles Jackson while he was laying in bed.

Sheriff Lott says the gun used in the April 6 incident had not been stolen, they are working to determine where it came from.

Both men were taken to the Alvin S. Glenn Detention Center.