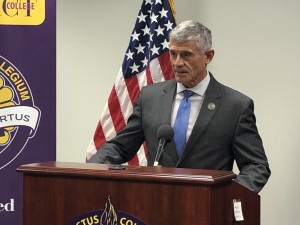 Columbia, SC (WOLO) —  University of South Carolina President Bob Caslen has officially resigned after serving as President of the school for the past two years.

The Board of Trustees Chair C. Dorn Smith III announced that Caslen did in fact tender his resignation Wednesday after focused discussions.

The Chairman says he has thanked President Caslen and his wife Shelly for their two years of service to the University.

Here is President Caslen’s message to the UofSC campus tonight following his resignation:

Caslen first offered to resign over the weekend after he failed to cite the author of a quote he used in a commencement address at graduation.

Caslen later referred to The University of South Carolina, as ‘California’, in that same address.

Caslen apologized and later verbally offered his resignation. At that time, the Board of Trustees would not accept it.

Wednesday night, the Board confirmed Caslen’s resignation will go into effect tomorrow, Thursday May 13, 2021.

Former University of South Carolina President Harris Pastides has agreed to serve as the interim President until a new person is found to serve in that capacity.

Tree trimming set for some Columbia Neighborhoods over next two weeks