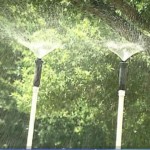 COLUMBIA, SC (WOLO)–The City of Columbia is working to keep you cool in the heat of summer.