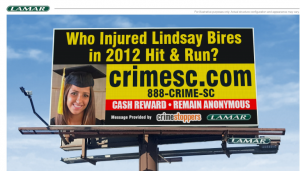 COLUMBIA, SC (WOLO)– Columbia Police say a former nurse continues to struggle physically, emotionally and mentally on the nine year anniversary of a hit and run. On September 16 2012, police say then 24-year-old Lindsay Bires was standing outside of Palmetto Health Richland when a white compact car ran off the road and struck her, causing life threatening injuries.

Investigators say it is important for residents to recall if they know anyone that drove a white compact car at the time, or had their vehicle repaired after the date of the incident.

Officials say that Lamar Advertising teamed up with CPD and Midlands Crimestoppers to donate billboards around Columbia asking for tips in this case.

If you have any information on this incident, call the Columbia Police Department or Crimestoppers at 1-888-CRIME-SC. Tips can also be submitted online at crimesc.com.