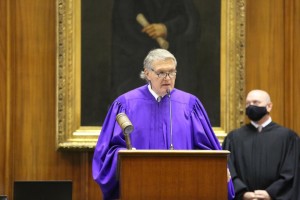 FILE – South Carolina Senate President Harvey Peeler presides over the Senate after being reelected to his leadership position at the Statehouse in Columbia, S.C., Tuesday, Jan. 12, 2021. Peeler has canceled a special session of the Senate planned for mid-October. (AP Photo/Jeffrey Collins, File)

COLUMBIA, S.C. (AP) — The South Carolina Senate won’t meet in special session next month after all.

Senate President Harvey Peeler sent a letter Friday to senators canceling the special session set to begin Oct. 12. They were supposed to debate how to spend billions of dollars in federal COVID-19 relief money and redistricting.

But a subcommittee working on new state Senate districts as well as U.S. House and South Carolina House districts said it won’t be finished with the new maps by mid-October, Peeler wrote.

Leaders of the South Carolina House also said this week that they would not come back to take up the relief spending bills, so Peeler wrote it was unnecessary to spend the money on a special session and “have these bills languish in the House until January.”

One thing not mentioned in Peeler’s letter or House leadership comments after a closed-door meeting this week were masks in schools.

The House put a provision in the budget passed in June that prevented school districts from requiring masks and the Senate did not remove it. Back then, the state was seeing about 150 new COVID-19 cases a day. South Carolina has been seeing several thousand new cases daily for nearly the past two months.

Democrats in the House and Senate called for a special session Aug. 17 to do something about the rapid spread of COVID-19 especially in schools. They noted in a statement this week that in the 36 days since, 1,500 people have died in the pandemic and 163,000 new COVID-19 cases were reported.

“It’s unfortunate that the House Republican Caucus has the time to meet in Columbia for lunch, but not to convene to address the ongoing and prolonged coronavirus pandemic,” Democratic Rep. Russell Ott wrote. “Children in South Carolina continue to be put in harm’s way while our Governor and legislative leadership sit on the sidelines and do nothing.”

Masks were not an item mentioned for a possible special session in the June resolution ending the Legislature’s regular meetings. It would require a two-thirds vote to add masks which would likely be a hard hurdle to get over in the Republican dominated House and Senate.

House Republicans held a closed-door meeting Wednesday and afterwards, Speaker Jay Lucas called the discussions “productive ands spirited,” but said he has no plans to call a special session because of the limitations of the session-ending resolution.

House Majority Leader Gary Simrill said there may be a special session in December for redistricting, which would leave about four months to handle legal challenges to the new maps before filing is scheduled to begin for the 2022 elections.