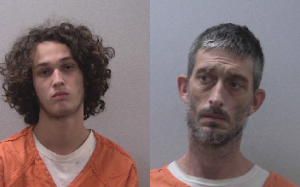 Cayce, S.C. (WOLO)–Two more suspects are in custody in connection with the death of a 30 year old Cayce woman.
A spokesperson for the Cayce Department of Public Safety says Charles Craft and Michael Ponder are both charged with accessory after the fact in the murder of Heather Jordan.
Police say the men helped the man suspected in her murder, Kendall Moody, move her body.
Craft was also charged in a pursuit that took place on September 24th where he is accused of firing shots at police.