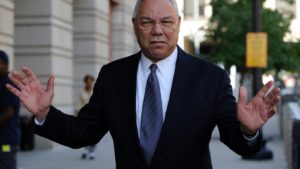 “General Colin L. Powell, former U.S. Secretary of State and Chairman of the Joint Chiefs of Staff, passed away this morning due to complications from COVID-19,” read a statement posted to his official Facebook page. “He was fully vaccinated. We want to thank the medical staff at Walter Reed National Medical Center for their caring treatment. We have lost a remarkable and loving husband, father, grandfather and a great American.”

According to CNN, Powell was the first Black national security adviser during the end of Ronald Reagan’s presidency and the youngest and first African American chairman of the Joint Chiefs of Staff under President George H.W. Bush.

He also served as the first Black secretary of state under President George W. Bush.

He is survived by his wife, Alma Vivian (Johnson) Powell, whom he married in 1962, as well as three children.

An amazing role model to those of us who aspired to public service, Secretary Powell’s presence was both humbling and humble.

He will sorely missed by a nation who loved him.

“I have fought the good fight, I have finished the race, I have kept the faith.” https://t.co/7QmVS8T8Gy

Saddened to learn of the passing of such an iconic leader…. someone who transcended race and party in true service to God and country. RIP Secretary Powell, a General and a Gentleman. 😢💔 pic.twitter.com/UPpAxBgs7K