Fire officials say no injuries were reported, cause is still being investigated 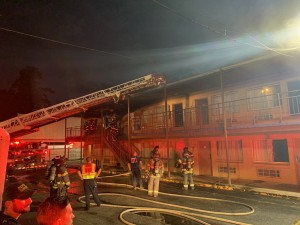 Columbia, SC (WOLO) – Columbia – Richland Fire crews responded to a fire just before 7 pm Monday evening after receiving reports that there was a fire at the Palmetto Hotel along in the 100 block of Morninghill Drive.

According to Fire Chief Aubrey Jenkins, multiple latter trucks responded to the scene and were able to knock down the fire quickly.  Officials say the fire was contained to one room in the hotel. no injuries were reported.

The cause of the fire remains under investigation.