(ABC News) — With the U.S. still reeling from the mass shooting at a Buffalo grocery store not even two weeks ago, President Joe Biden addressed Americans in the terrible wake of Tuesday’s shooting at a Texas elementary school that left at least 18 young children dead.

A clearly emotional Biden spoke to the nation from the White House Roosevelt Room about an hour after arriving back from a five-day trip to Asia and about two hours after ordering, from Air Force One, that the flag flying above the White House be lowered to half-staff. 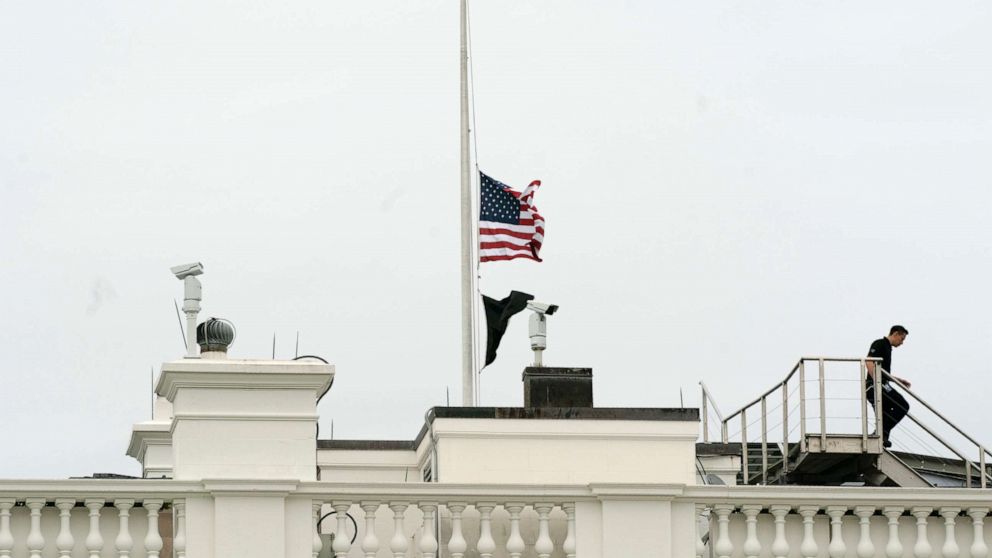 An American flag flies at half-staff at the White House, Tuesday, May 24, 2022, in Washington, to honor the victims of the mass shooting at Robb Elementary School in Uvalde, Texas. Manuel Balce Ceneta/AP

“I’d hoped, when I became president, I would not have to do this again,” Biden began. “Another massacre. Uvalde, Texas. An elementary school. Beautiful, second, third, fourth graders,” he said.

“As a nation we have to ask when in God’s name are we going to stand up to the gun lobby,” he said, raising his voice. “I am sick and tired of it — we have to act.” 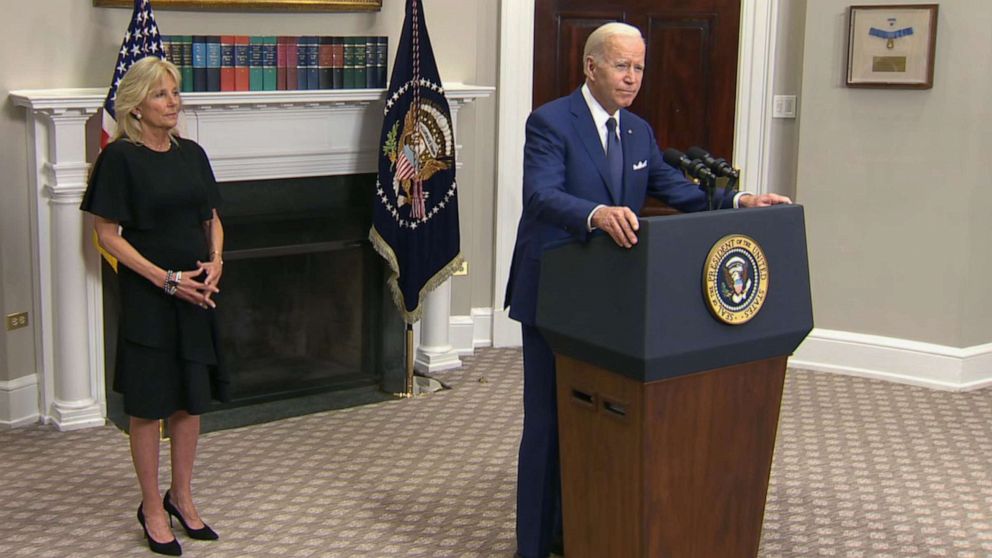 President Joe Biden gives remarks about the school shooting in Uvalde, Texas, from the White House, May 24, 2022. ABC News

Two adults, including a teacher at Robb Elementary School in Uvalde, Texas, were also killed by the 18-year-old suspect — said to be a student at Uvalde High School — who also died, according to Texas GOP Gov. Greg Abbott, whom Biden spoke with on his way back to Washington.

President Biden just spoke with Governor Abbott to offer any and all assistance he needs in the wake of the horrific shooting in Uvalde, TX. pic.twitter.com/u3yMHFtcJJ

Less than two weeks ago, just before Biden traveled overseas he was in Buffalo, condemning a suspected white supremacist accused of killing 10 Black people going about their daily lives at a local supermarket. 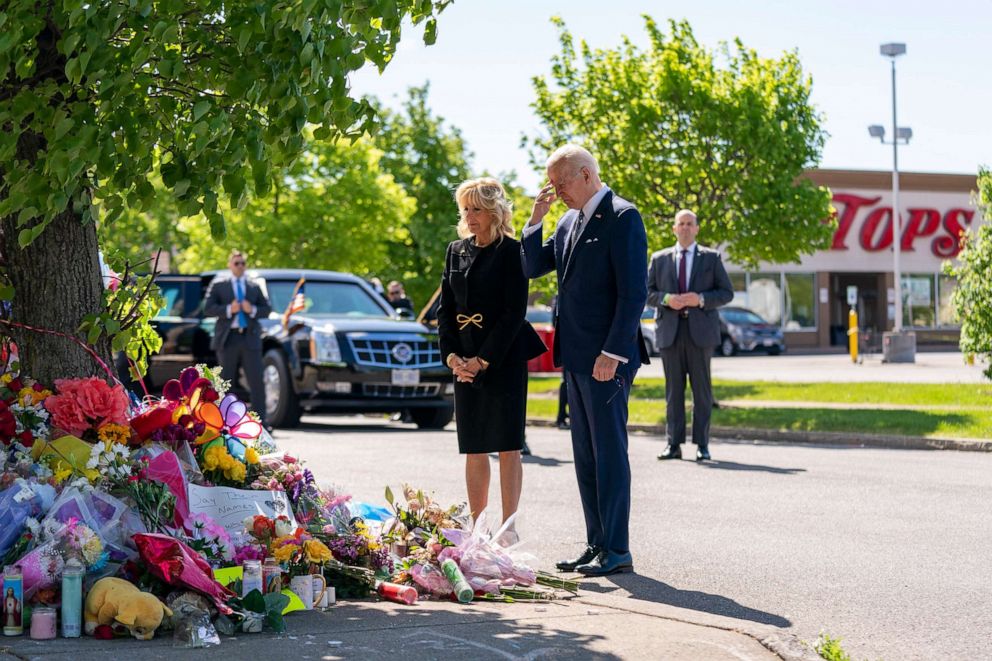 President Joe Biden and first lady Jill Biden visit a memorial near the scene of a May 14 mass shooting at Tops supermarket in Buffalo, New York on May 17, 2022. Andrew Harnik/AP

There, he called on Congress to “keep weapons of war off our streets.”

A short time before Biden was scheduled to speak, Vice President Kamala Harris, fighting back tears, commented on the shooting as she began her pre-scheduled remarks at a Washington gala.

“Tonight is a rough night, we planned for a great celebration, but I’m sure most of you have heard the tragic news about what happened in Texas,” she said.

“As a nation, we have to have the courage to take action and understand the nexus between what makes for reasonable and sensible public policy to ensure something like this never happens again,” she said.

In February, on the fourth anniversary of the shooting at the Marjory Stoneman Douglas High School, where a single gunman killed 17 students and staff, Biden, again, pushed lawmakers to pass legislation requiring universal background checks and banning assault weapons, among other measures to reduce gun violence.

And last December, on the ninth anniversary of the shooting at Sandy Hook Elementary School, where a single gunman killed 20 first-graders and six teachers, Biden spoke to victims’ families in a speech from the White House, demanding that lawmakers “owe them action.”

“Because of your leadership, we forged a broad coalition and enacted more than 20 executive orders,” Biden said. “We came close to legislation, but we came up short. It was so darn frustrating.”

While serving as then-President Barack Obama’s vice president, Biden was tasked in the wake of the Sandy Hook shooting to lead the administration’s effort to enact tougher gun control laws — but in the nearly decade since the nation mourned for Newtown, no action on gun control has passed at a federal level.

Biden, like some of his predecessors, has repeatedly pushed for reforms to address gun violence but has faced a reluctance from Congress to engage on the issue.

Bills aimed at expanding and strengthening background checks have passed through the House’s Democratic majority but have failed to garner enough Republican support to pass the Senate filibuster’s 60-vote threshold.

As president, Biden has used some executive powers instead, like when he announced new regulations on so-called “ghost guns” last month.

But asked about what more he might do to address gun violence when leaving Buffalo last week, Biden conceded there was “not much” he could do through executive action.

“I’ve got to convince the Congress that we should go back to what I passed years ago,” Biden said, referring to the 1994 passage of an assault weapons ban that expired in 2004.

Since Sandy Hook in 2012, the U.S. has endured more than 3,500 mass shootings, according to the Gun Violence Archive.