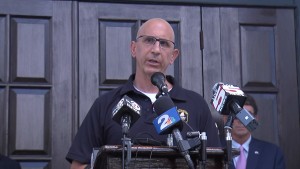 Four of those people are still in critical condition, as of Tuesday afternoon, he said. The youngest victim was 17-years-old.

Officers responded to America and South Streets around 11:40 p.m. on Monday initially for a noise complaint from a large party in a vacant lot.

The chief said when the officer responded, their car was shot at twice and bullets entered the cruiser.

“We are lucky we don’t have a dead cop, or dead citizens, or dead community members,” Reynolds said.

Mayor John Tecklenburg said he is angry and fed up with gun violence, especially as it is at the top of everyone’s mind after recent mass shootings in Buffalo and Uvalde.

He said “thoughts and prayers” are necessary but not enough. He listed action items on ways to address gun violence. Those items included accountability measures for landlords, a graduated penalty system for offenders of gun laws, and continued enforcement of current laws.

One Charleston police officer who was in the area suffered injuries from shrapnel and has been treated. Two Charleston County Sheriff’s Office deputies were assaulted by members of the crowd- resulting in two arrests.

At the press conference, community members voiced their concerns about gun violence in the community.