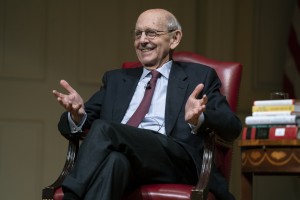 FILE – Supreme Court Justice Stephen Breyer speaks during an event at the Library of Congress for the 2022 Supreme Court Fellows Program hosted by the Law Library of Congress, Feb. 17, 2022, in Washington. The fertile mind of Breyer has conjured a stream of hypothetical questions through the years that have, in the words of a colleague, “befuddled” lawyers and justices alike.(AP Photo/Evan Vucci, Pool, File)

ABC NEWS– Supreme Court Justice Stephen Breyer said he will officially step down from the bench at noon on Thursday, relinquishing his duty as a justice and clearing the way for the swearing in of the nation’s first Black female justice, Ketanji Brown Jackson.

“It has been my great honor to participate as a judge in the effort to maintain our Constitution and the Rule of Law,” Breyer wrote in a letter to President Joe Biden, dated Wednesday.