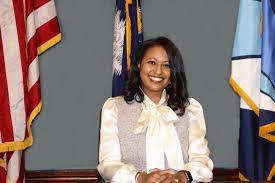 Teresa Wilson has served as Columbia's City Manager since 2013

Columbia, SC (WOLO) — Residents will head to the polls in November to determine who will lead South Carolina over the next four years. Governor Henry McMaster who has been holding the seat for the last 5 years. McMaster was elected to the position after then Governor Niki Haley stepped down from the position to accept the job of United Nations Ambassador under President Donald Trump.

Last month, McMaster won the Republican nod, while his challenger, Former Congressman Joe Cunningham won the Democratic bid for Governor of South Carolina. As both work on their campaigns, one of the next major decisions they have to tackle is who will make up their team.

Pamela Evette has been serving as the Lieutenant Governor in South Carolina under Governor McMaster, but Cunningham is still creating a list of possible candidates he would like to have by his side if he were to wins.

In a social media post Monday, Cunningham released what he calls a “short list” of the names of a few of the individuals he thinks would make a good Lieutenant Governor, if elected in November. One of the names on that list is Columbia City Manager Teresa Wilson. Wilson who has served as the City Manager for the Capital City since 2013 says she is not at all interested in leaving her post as one of  Columbia’s top government officials.

“It is an honor to be considered as a prospective Lt. Governor candidate by Gubernatorial candidate Joe Cunningham. While I certainly appreciate my name being included on the list of top candidates, I respectfully decline consideration, as I remain committed to the citizens and businesses of Columbia, Columbia City Council and our employees. I hope this nod from Mr. Cunningham is a testament to the great work happening in Columbia and my dedication to excellence in governance of our capital city.”

Below you can see the complete list of “potential” prospects he would like to consider for the position.

Today I released my short list of prospective Lt. Governor candidates. Our ticket will represent the future of South Carolina and our amazing potential. I am committed to selecting a qualified, visionary leader to join our team and help usher in a new generation of leadership. pic.twitter.com/ZDNgR0z38e