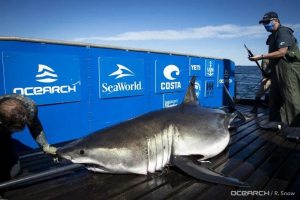 Data shows the shark was tagged on Sept. 12, 2020, in Nova Scotia. He was named for all of the wonderful people of Cape Breton where he was tagged.

According to their tracking data, Breton has been swimming in Florida for the past two months, and now, spotting him here is something they’re calling an anomaly.

“Breton is somewhat of an anomaly. While the rest of our actively pinging white sharks are off the Northeast United States or Atlantic Canada, Breton remains in the warm waters off the Southeast US,” according to OCEARCH. “This is the latest we’ve seen one of our white sharks stay this far south in the Western North Atlantic. Typically we notice our white sharks start their migration north from mid-May to June.”

They said this is the latest they’ve seen a white shark stay in this region; as they typically start migrating north between May and June.

As Breton just keeps swimming, and adapting, to the Myrtle Beach coast, Abel said people in the water should have nothing to fear.

“We should be afraid for sharks, rather than of them,” he said.

He explained that humans are more of a danger to sharks than they are to us.

He said, “I don’t want to underplay the significance of shark bites.”

However, in all cases, we humans are the anomaly in the water.

“When we get in water, we are very awkward blobs compared to anything that lives in that water and swims and forages and moves around and spends their entire life there,” Abel said.

If you do happen to run into Breton, or any other shark, Abel said the best and safest way to address the situation is by slowing moving away in the water.

The OCEARCH team said they will be watching Breton’s movements closely over the next few weeks.

You can track him by clicking here.

The Myrtle Beach area sees around 20 different types of sharks in our waters through out the year; and Breton is not the biggest shark that’s ever pinged near the coast here in Myrtle Beach.

On Christmas day 10 years ago, Mary Lee, another great white shark, weighing in at more than 3,400 pounds and over 16 feet long was tracked just 2,500 feet off the Myrtle Beach coast.