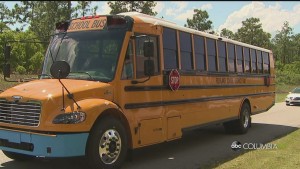 COLUMBIA, S.C. (WOLO) – More students in the Midlands will be headed back to class this week which means drivers will be back sharing the roads with school busses.

South Carolina Highway Patrol will be out in full force looking for driver breaking the law. Trooper David Jones says not only will Highway Patrol be following buses but troopers will be riding on some as well. He reminds drivers passing a stopped school bus can cost them $1,000 and six points off their license.

“All too often we see where families can’t afford a set of new tires if they needed them, much less a $1,000 ticket. We don’t want to have to write that ticket but every year we’re making these charges because people are making those poor decisions. We want to educate motorists that if you see a school bus stop on a four lane road the traffic behind that buss have to stop, two lane road those coming toward the school bus has to stop, and on a four lane road oncoming traffic does not have to stop,” says Trooper Jones.

He says make sure you familiarize yourself with the rules of the road before August 15th.