The suspect was identified as student Christopher Darnell Jones Jr. 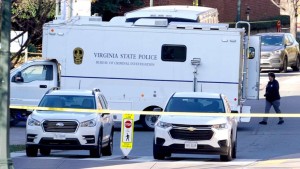 A Virginia State Police crime scene investigation truck is on the scene of an overnight shooting at the University of Virginia, Nov. 14, 2022, in Charlottesville.
Steve Helber/AP

ABC NEWS—A suspect is in custody after three football players were killed and two other students were injured in a mass shooting at the University of Virginia in Charlottesville on Sunday night, authorities said.

The shooting took place on a bus full of students returning home from a class field trip to see a play in Washington, D.C., university officials said.

All three victims killed were on the football team, University of Virginia President Jim Ryan said at a news conference. The victims were identified as wide receivers Lavel Davis Jr. and Devin Chandler and linebacker D’Sean Perry.

Jones was a running back for the university’s football team in 2018, though he never played in a game.

A motive is not clear, Ryan said.

One injured student is in critical condition and the other is in good condition, Ryan said Monday.

The shooting was reported on the University of Virginia’s campus at about 10:30 p.m. local time, according to police.

University of Virginia sophomore Em Gunter said she was in her dormitory doing schoolwork when she heard gunshots.

“I looked over to my friend and like, ‘Did you hear that?’ I was like, ‘I think that was like gunfire,'” Gunter recalled in a telephone interview with ABC News early Monday, while sheltering in place.

Gunter invited her friend Nicholas Lansing to shelter in her third-floor dorm room, since his is on the ground floor.

“I have one locked door, but I also have a glass window that leads directly outside. So I’ve been up here on the third floor in Em’s room for the past three and a half hours,” Lansing, a University of Virginia junior, told ABC News via telephone.

Longo said Jones is facing charges of three counts of second-degree murder and three counts of using a handgun in the commission of a felony. Charges could change, he said.

Longo also revealed prior history involving Jones. In September, university officials investigated a report of Jones making a comment about possessing a gun, but Longo said Jones did not make a threat.

Jones was involved in a hazing investigation, which was later closed due to uncooperative witnesses, Longo said.

The university’s threat assessment team also learned of a prior criminal incident involving “a concealed weapon violation” from February 2021 in another city, Longo said. Jones is required as a student “to report that — and he never did — so the university has taken appropriate administrative charges,” Longo said. That matter is pending, Longo said.