Deputies search for man accused of exposing himself in public 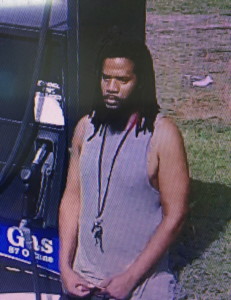 According to officials surveillance video shows the suspect walk in the direction of Joe S. Jeffords Highway and walked walked past the walk up window to the business and to the side of the store where the victim said he appear to be reaching into his shorts with his back to the camera.

The victim says the suspect then fixed his shirt and walked back toward toward the front of the business where the worker claims she could see the suspect exposing his genitals while smiling at her. According to a statement made by the victim in a warrant obtained by ABC Columbia News, the worker asked the man “Can I help you?”.  The victim says the suspect, still exposed replied saying ” I just wanted to tell you to have a a blessed day” before looking down towards his waist.

The victim called police and reported the incident and released the surveillance video to police in hopes of identifying the man. If you recognize the suspect and know where he might be your asked to call the Orangeburg County Sheriff’s Office at (803)531-4647 or  Crimestoppers at 1888-CRIME-SC