Orangeburg, SC (WOLO) —Sheriff Leroy Ravenell says they are looking for a man they say told a woman he had a weapon and forced the female driver to take him several places around Orangeburg County.

Authorities say the woman called them to notify them of the incident they say took place after she pulled over at a Bamberg Highway business to grab some things around midnight Friday.

The victim told officials the man pictured in the photos led to believe he was armed and walked up to her and forced her to let him in her car and take him to multiple locations before he got out of the car. 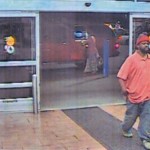 If you recognize this man or have any information concerning the case you’re asked to call the Orangeburg County Sheriff’s Office or Crimestoppers at 1888- CRIME-SC.