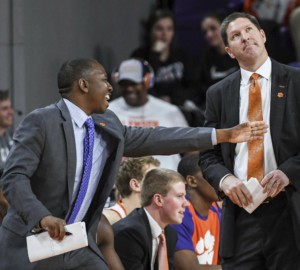 The video from 2017 included Smith commenting about why Clemson’s football team is so successful and Dawkins telling Smith he could help get cash to the family of ex-Duke star Zion Williamson if he had chosen to attend Clemson.

Smith was scheduled to have his contract renewed at a board of trustees meeting last week until he was heard in court talking with Dawkins and an undercover FBI agent about several things, including why Clemson’s national championship football program is so successful.

Smith said in the July 2017 video “if you do it and use resources at Clemson, like you can really keep everything tight.”

Later in the video, Smith said, “It’s a small college town. You can come to a game one night, after the game, you seed a dude out there in a nice looking suit, you like, ‘wait a minute now.’”

Clemson started a review of its football and men’s basketball programs after the wiretap was played in court.

“We feel very strongly that those were unfortunate comments and we are doing our due diligence, but there is no reason to believe, and nothing that we’ve been able to find at this point in time, that implicates the football program in any of that,” Clemson athletic director Dan Radakovich said.

Radakovich met with Brownell and Smith this week.

Clemson football coach Dabo Swinney told The State newspaper of Columbia at a booster club event that Brownell had reached out to apologize for Smith’s comments.

Swinney was disappointed with the characterization and is proud of how he runs his program.

“We’ve always been a program committed to doing things right way and we always will be,” Swinney said.