CNN —The nonprofit group that administers the SAT said Thursday it will assign a score to students who take the test to reflect their social and economic backgrounds.

The new score — first reported by the Wall Street Journal — comes amid heightened scrutiny that colleges are facing over the admissions process and the diversity of their student bodies.
The College Board said it would implement what it calls the “Environmental Context Dashboard,” which would measure factors like the crime rate and poverty levels of a student’s neighborhood, to better capture their “resourcefulness to overcome challenges and achieve more with less.”
“There is talent and potential waiting to be discovered in every community — the children of poor rural families, kids navigating the challenges of life in the inner city, and military dependents who face the daily difficulties of low income and frequent deployments as part of their family’s service to our country,” David Coleman, chief executive officer of the College Board said in a statement sent to CNN.
“No single test score should ever be examined without paying attention to this critical context,” he added.
The Environmental Context Dashboard has been piloted at 50 colleges and universities, according to a spokesman for the College Board, and the organization hopes to make it more widely available to other schools next year.
Students are scored on a scale of 1 to 100 based on data from records like the US census and the National Center for Education Statistics. According to the College Board, a score of 50 would be considered average, while a number above 50 indicates more hardship. The score takes into account information from the student’s background, but it does not include race.
According to the College Board website, the graphs below was the framework for the environmental context: 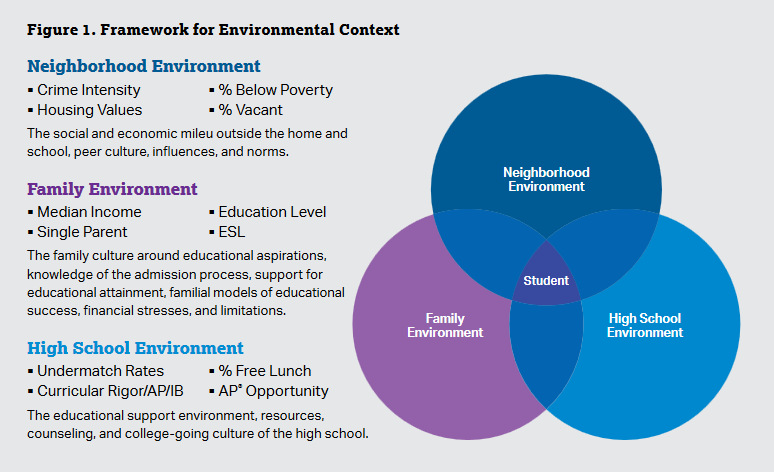