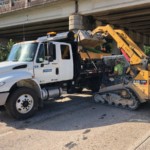 (Courtesy: SCDOT/Twitter) SCDOT crew cleaning up U.S. 1 after a truck hit the bridge.

The SCDOT had closed I-20 EB in Lexington County at US 1 due to a truck hitting the structure early Tuesday morning.

According to SC DOT officials, the damage was not significant.

Drivers were detoured off the Interstate at US 1 to US 378 and then returned to I-20.

According to SC Highway Patrol, the incident happened around 4:30 a.m. today. Authorities say there are no reports of injuries.

Troopers have a detour route below:

According to investigators, the incident happened around 4:30 a.m. today.

Troopers say they are placing a barrier underneath the damaged portion of the bridge to catch falling debris; once it’s in place, authorities say the bridge will re-open.

Authorities say there are no reports of injuries.

Highway Patrol says expect delays as they investigate the crash.