USC releases statement in response to headline in The State 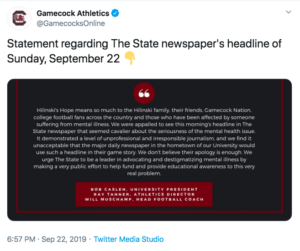 The headline was written “Hilinski Hope Sinks” for an article recapping the Gamecocks loss on Saturday to Missouri.

In the statement, USC says the headline is “cavalier about the seriousness of the mental health issue.”

The headline appears to be an insensitive play-on-words regarding Hilinski’s Hope — an organization founded by USC quarterback Ryan Hilinski’s parents after Ryan’s older brother Tyler took his own life last year. The organization seeks to provide resources and awareness for mental health issues in the world of college athletics.

The State went on Twitter to offer an official apology for the poor choice of words in the Sunday paper: 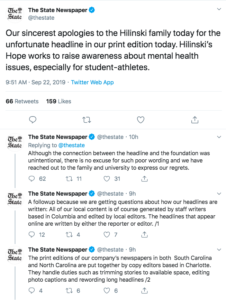 The statement from USC went on to say that they believed this apology was not enough, and called for The State to “be a leader in advocating and destigmatizing mental illness by making a very public effort to help fund and provide educational awareness to this very real problem.”

Anyone interested in learning more about the mission of Hilinski’s Hope or making a donation can visit the organization’s website for more information.