First responders from around S.C. discuss needs, issues with legislators

The First Responder Caucus offered responders a chance to talk about the critical needs and issues that law enforcement, EMS and fire are facing in the state. 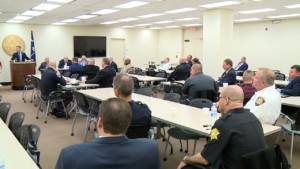 Columbia, S.C. (WOLO) — On Thursday, first responders from around the state gathered in Columbia to talk to legislators about the issues they’re facing. The First Responder Caucus offered responders a chance to talk about the critical needs and issues that law enforcement, EMS and fire are facing in the state.

“Our first responder caucus consists of eight House members that are prior law enforcement or first responders, and then several other representatives that still feel passionate about the cause,” said Republican Rep. Chris Wooten of Lexington Co. “Take care of the people that take care of us on a daily basis, because if we don’t do that, then the whole society fails.”

“I think it’s good for us to be able to communicate with the caucus representatives, and let them know what our issues are,” said Chief Byron Snellgrove, Director of Public Safety with the City of Cayce.

Some of the issues that first responders face are statewide; and include recruiting and retention, dealing with PTSD, and mental health transportation.

“Upstate, the Midlands and the Lowcountry. I mean all of them have the same issues,” said Snellgrove.

First responders said it’s important for legislators to know what they deal with, as the legislators are the ones making the laws and guidelines.

“Them understanding us and us understanding them are really what allows those laws and bills to work together so that we can better perform our jobs,” said Snellgrove.

Legislators said the forum was productive, and now there’s work to be done.

Wooten added that they’ll also go to different parts of the state to hear from first responders directly.